skip to main | skip to sidebar

I've been really lax recently as far as blogging is concerned. One of the reasons is that I have been involved with Facebook. To be more specific, Lexulous on Facebook. This can become obsessive! Just ask Kiwi Nomad who seems to be beavering away at the game when she should have her head down and be fast asleep!

This is a game I am having with Jemima at the moment. I think it's stalemate! 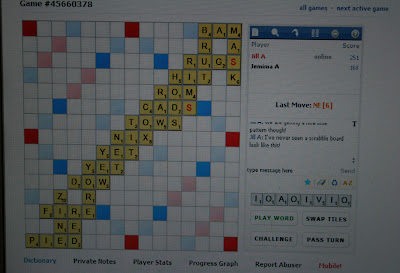 Since I put this post up, Maalie pointed out that my comments were being moderated. I had no idea, but fiddled about on the settings, and lo and behold, there appeared 19 comments waiting to be moderated, all from my last post. I do apologise for not answering these comments. Until today, I had no idea they were there waiting for me. Especially the one that asked me whether I had run away with Martin. Actually, well ... er ... MARTIN ...?? where are you ..??
Posted by lorenzothellama at Thursday, May 21, 2009

Stalemate? I can see a move there worth at least 50 points!

where would that be?

I'll give you a little time to work it out for yourself :-)

What a very sophisticated shape this has. Nothing we play has ever looked this flash. I am surprised you don't put up a screen take of your last beginning!!!

Ooh, you play Lexulous? Let me know if you fancy a game.

That's an incredible game. It would be a shame to make any more moves because it would upset the symmetry of the board!

I'm so poor at word games like Scrabble or the ones where you "unscramble" a word that I haven't even tried this one!

It is good to see you back here though!

Word verification is "riagands". How funny is that?

Lexulous. What a funny word. Sounds like a dictionary with nits? Does it have a meaning?

Yeah.... I'm wondering too.... about Martin I mean.
I haven't tried Facebook, cos I know I'd never get anything else done.

Hello lorenzy bum, like you I have been away for a while from the blogging scene but now I am back!

Put a picture of you on my blog tonight.

Have a good bank holiday weekend my friend!

Wow - a half marathon! I'm truly impressed!! I hope you don't end up with a blister that the one Simon has pictured on his blog!

I have never heard of this game! And, I know - I am addicted to Facebook, too... If you are interested, check out my artist page there! Hope all is well! Cheers from Boston! :D

Hi Llama - how was the running?

I finally merged the two blogs so you'll find me at "halfmom" from now on!

Second grandchild due on Monday? Is that going to happen in Japan? How exciting.... keep me informed!
BTW baby Isaac is SO SWEET. I held him for ages today.

My head hurts due to drinking too much cloudy cider last night, help me lorenzybum!